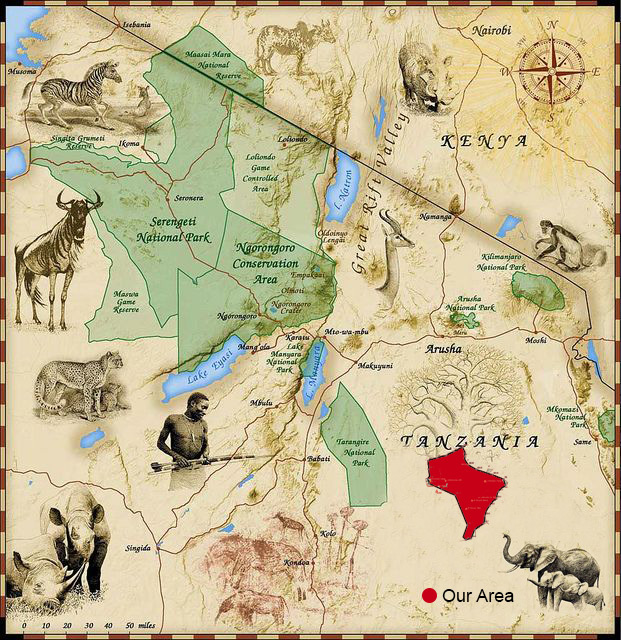 The area is easily reached from Arusha city about 25 minutes by light aircraft and about 200 km, (3 1/2 hours) by vehicle via the almost all weather road to Engasumet town headquarters of Simanjiro district and Kibaya of Kiteto district. There are several other roads to get into this area which may be longer or shorter but hard to negotiate during wet seasons. There are two airstrips one at NAIBORMURT camp -Latitude:4⁰.27’.0”South and longitude:36⁰.41’.0”East and just outside the block from LOLMOJOY camp -latitude:4⁰.32’.54”South and longitude:37⁰.01’.13”East.The distance across from Tarangire national Park is about 70 km. and about 125 km from Kilimanjaro International Airport.

The topography varies from plains to scattered ridges or rows of hills. Altitude ranges between 560mts and 2123mts above sea level. Most of the flood plains have black/cotton soils, while hills are covered with fragile soils prone to erosion. Acacia / commiphora woodland, open bush lands, grasslands and thickets cover most of the northern and southern parts of the district. Most of the vegetation is highly adapted to dry conditions and periodic droughts. Bush fires are part and parcel of the area mostly started by the livestock herders to ward off pests like ticks, tsetse flies etc. and to promote green vegetation growth for their livestock.

Masai Open (East) concession, being part of  Simanjiro district, is semi- arid with an average annual rainfall of 500mm. It has dual periods of unreliable rainfall consisting of short rains in November- December and long rains in March- April. The cold months are May- July while hot months include August- February. Temperatures range between 13⁰C to 31⁰C.

This block is part of Lake Natron, Lake Manyara and Tarangire Ecological system. The closest being Taringire National Park about 70 km to the East. Animals migrating from Tarangire National Park  and Mkungunero Game Reserve have to pass through Lolkisale and Simanjiro Game controlled areas including,  open areas like Masai open (West), Irkishbor and Masai Open (South) before entering in to this concession.The Kitwai plains hunting concessions share the border eastward, therefore the migrating animals come and go through Masai Open (East) hunting block too.

A list will include the following in order of size but not necessarily in abundance:

All the big FIVE are present except the RHINO which was wiped out in the seventies.

Masailand as a whole lacks permanent surface water sources. Most of the water is through water holes and seasonal rivers during rainy seasons. In this block water is available at Sapuro dam (Niekundo-Siron), Lordungo water hole, Nandoto water hole and Oloitururo water hole. Very few swamps and rivers cross the concession which contains enough water for human, livestock and wildlife. All these water sources are not sustainable.